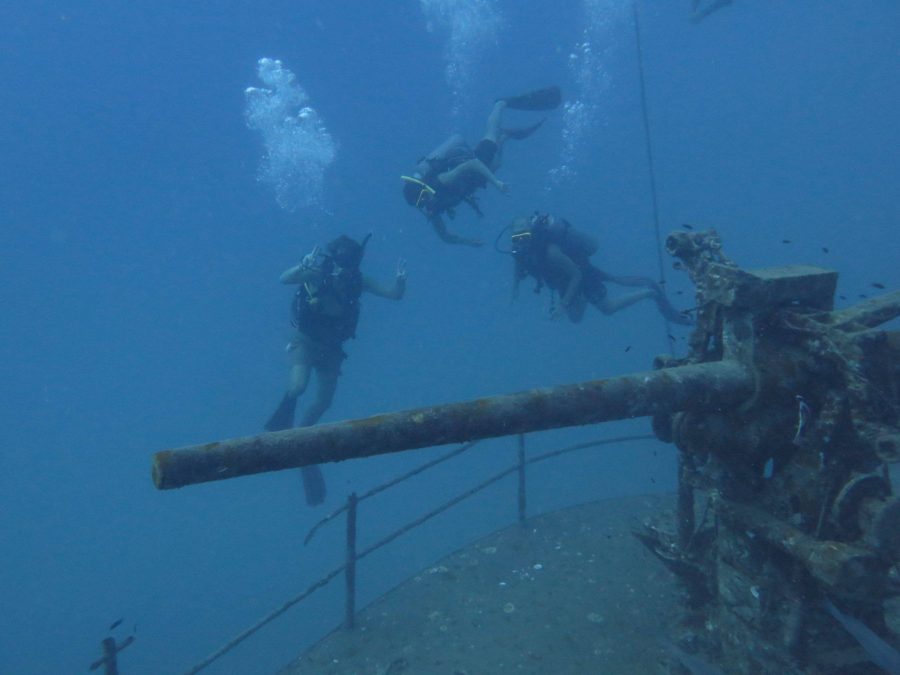 Heres a new article from one of our Instructors Alex. He describes the great experience you have when you dive wrecks. The HMS Sattakut which lies off the coast of Koh Tao is a great example.

“Wreck diving is awesome. Fact. There’s nothing quite as eerie and cool as an underwater wreck emerging out of the nothingness. Something heaped in History that seems so out of place but also fits so perfectly to its underwater setting.

Here on Koh Tao at Davy Jones Locker one such wreck open to your exploration on you advanced open water course and beyond is the HTMS Sattakut. This is Koh Tao’s newest wreck. It was sunk in June 2011, and has quickly become one of our customers most popular dive spots. Originally launched in 1944, this impressive battleship was commissioned by the U.S. Navy and used in the occupation of Japanese islands during WW2. 49m in length, Sattakut boasts two large canon guns and has many swimthrough and penetration possibilities for wreck specialty and tech courses. It lies between 22-30m hence is only available to advanced divers, something I personally like as it keeps hoards of open water students away from it.

If you just think you are going to see a wreck though the Sattakut is also home to a few Jenkins whip rays and there are times that it feels the fish population is greater there than any other dive site on the island. The Sattakut is also one of my favorite dive spots because it both a great site for newer divers having their first time wreck diving but also more experienced wreck divers looking to improve their skills and explore.

If you want to see what the wreck looks like before you descend to it the video below shows you a 3D representation of the HTMS Sattakut.”