Plan to descend the  line and look around the bridge, forward section. The plan is the same as dive 1 with the stops padded as per v planner . 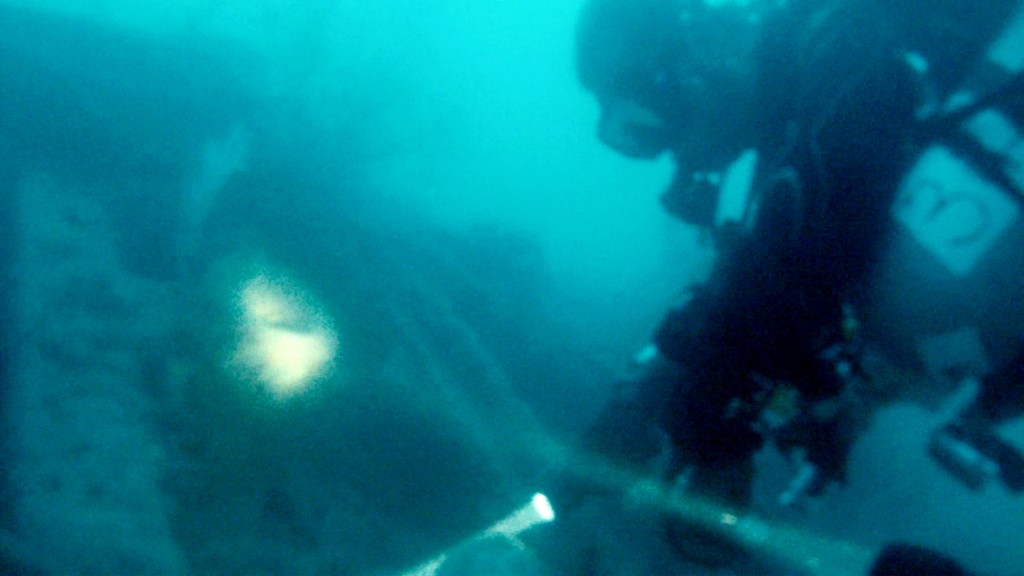 We enter the water at 15:50 and descend down the line. Changed the bottom stage reg at 30 mtr and this one works ok. Also changed my mask which was fogging up every time I breathe out of my nose, causing me to stop on the decent  to check the  blurred vision I was suffering from. This time no problems at the bottom of the line, 20 mtr vis and no current. Fantastic. The sea state had also settled down to around 0.5 of a metre. Classic NE monsoon. I arrived at the bottom of the shot and there sat a handwash basin. I run out over the top of the bridge and watched  Dave enter the wreck, down some stairs, with Vince following.

After 70 years  underwater this wreck hides well the horrors  it saw as one of the notorious hell ships. I decide there will probably be t0o much silt if I follow them in, as I’m shooting video. I find a nice clean entrance and follow the stairs down and look around.There is a nice clean swim through of around 15 mtr towards the stern with lots of light on the port side. So I decided to swim through shooting video as I go.

It’s here that I  find evidence of the captains cabin and restroom, with toilet still intact. This is probably where the handwash basin came from. Then I found a large oil lamp which disintegrates as I look at it creating a lot of silt. Fortunately there’s a lot of light in this area and I easily swim out of this deck through the side. It’s then that I hit my thirds, so I go back to the line and on twenty three min there is no sign of Dave and Vince. So I decide to start  running my ascent. At 30 mtr I sight Dave and who gave me an ok which I return.

Note: At the start of the dive we asked the captain to let go the line so that we could untie the shot. This he should have done on 20 min, but when I left the bottom of the line it still had tension, which I did not realize  until my run time was at 45 min.

Dave catches me up at the 9mtr stop and he signaled he was a little low on o2 as mikko had only boosted 100 bar into a 6 ltr stage, so I finish my deco and give him my o2 after switching to my 36%.

As the crew had replaced the top tensioned shot with a normal float, the ascent line was slack, the same as the current. After I was recovered into the boat, I found out the surface cover was a little concerned. This was because my lift bag is yellow, the same color as the signal tube for “emergency need gas”. So I  caused a bit of a flap at the surface when the crew saw it go up.

Mikko and Tappy ran a short dive to untie the wreck and we left heading for the USS Largarto.

Check out our video of the Tattori Maru dive here; http://www.youtube.com/watch?v=pKCTv__C714