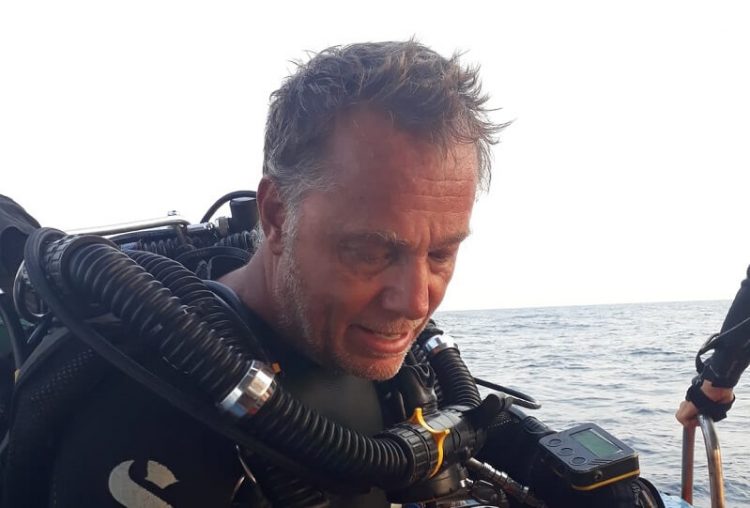 I’ve had the pleasure of joining Bruces’ wreck diving trips out of Sami San before and was looking forward to getting out to sea for 5 days – without wifi connection! This alone would have tempted me, also on offer was the chance to dive two of my favorite shipwrecks – the Seacrest and the Tottori Maru, both remote and dived rarely. However, the conditions were not reading from the same script.

Driving up to the boat the sun had already set. The pier was typical of a fishing pier in Thailand, wood construction and falling apart. Fortunately, the crew helped me load and we were soon on our way. The Sea Crest lies too distant from Sami San, so we decided to make a stop on the way at the big steel wreck we had dived the year before. Pumping gas on root we had elected for 12/50 on board, bottom bail of 15/45, a travel gas of 18/30 then 50 per cent deco gas. 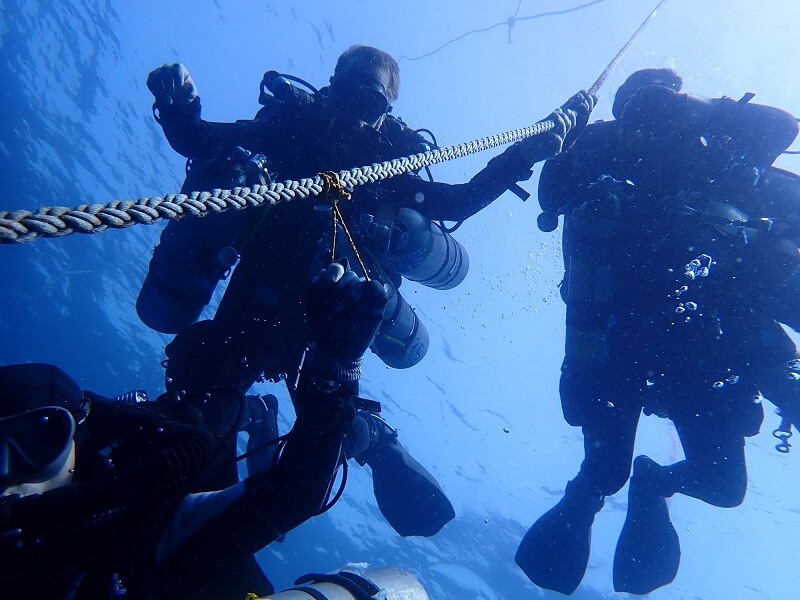 The sea conditions were deteriorating, and the wind was increasing in strength. I wondered if the captain would return to port – 3 meter high frequency waves are unsettling on a wooden boat. However, the captain exuded confidence and we continued, dropping anchor at 3 am.
Tying everything down we settled for an uneasy night’s sleep, wedging myself into the bed hoping the storm would blow over by morning and drifting in and out of consciousness. Morning came quickly, sadly there was little relief from the wind. We occupied ourselves – playing with our rebreather parts (normally tech divers heaven). Afternoon came, the wind dropped off a little, but we had already written off the day and asked the captain to move to the main event – the Seacrest. 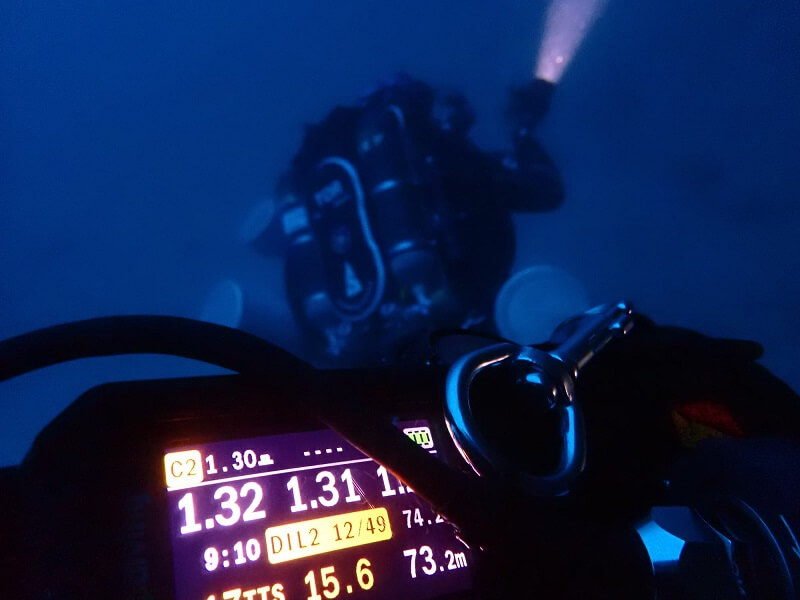 As the sun rose next day calm had visited the sea with 1 meter swells. We made short work of breakfast while wishing the wind to drop. Jumping into my suit (while finishing off a sausage) Bruce and I entered first. Early morning dives have reduced color at depth due to less light penetration. This did not detract from the enormity of the structure coming into view.

The shot was 20 meters away from the mark but the wreck was clearly visible. The shot position has great bearing on the quality of the dive, we were on the hull side midships, running a distance line out – first to the wreck then to the bow. Passing a hull entrance and getting my bearings, I turned the dive and we made it through the moon pool before having to turn again to recover our ascent. 25 minutes when wreck diving at 70 meters is never enough time. Reluctantly we left the bottom to complete our penalty. 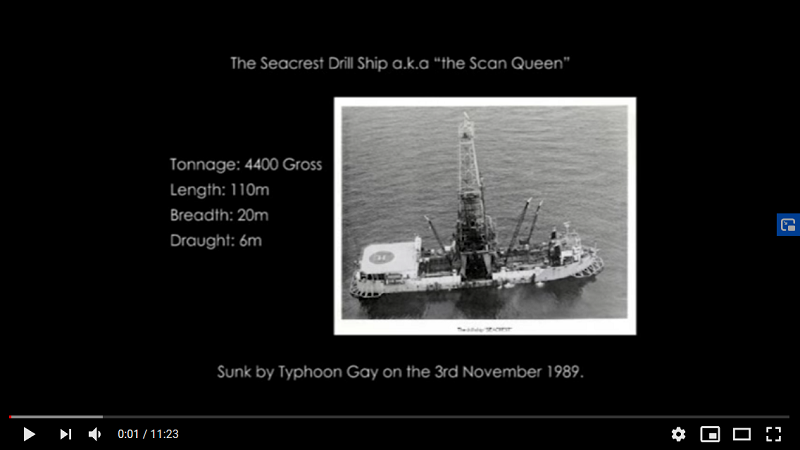 Waiting until 4 o’clock before entering for the second dive gave good time to off gas. With plenty of light on the wreck the ship came to life, trevallies and eagle rays were circling us on the descent. Having our bearings from the first dive helped and we headed towards the deck which is inverted. Everywhere we looked had bits of large machinery. Again, the time passed too quickly and we reluctantly headed for the ascent line. Once aboard we recovered the anchor then head towards the Tottori Maru (hell ship).

The wind increased overnight and by morning we had 2 meter wave height although this was diminishing. Our captain asked us to dive quickly so we could make a run closer to the coast. Again Bruce and I entered first. Wrecks from WW2 seem to have a completely different feel to them when dived, the first thing you see the on the wreckage is the amount of coral growth – even at 75 meters.

The shot line was placed abaft of the bridge. Bruce and I headed towards the stern, looking inside the holds. Twisted metal gave testament to the ferocity of her sinking. Early in the morning less light penetration made identifying her features more difficult. This did not diminish from this fascinating shipwreck, the abaft holds kept PoW’s imprisoned during their horrendous journey to the work camps. It’s hard to shake the image of suffering endured by the poor men forced into the voyage. Lest we Forget. 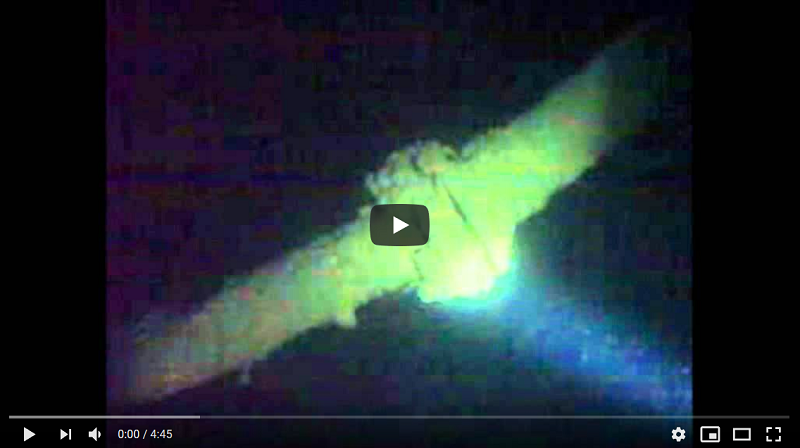 Lifting anchor 11:00 we turn towards port and the long trip home, with thanks to Bruce Konefe and the team members