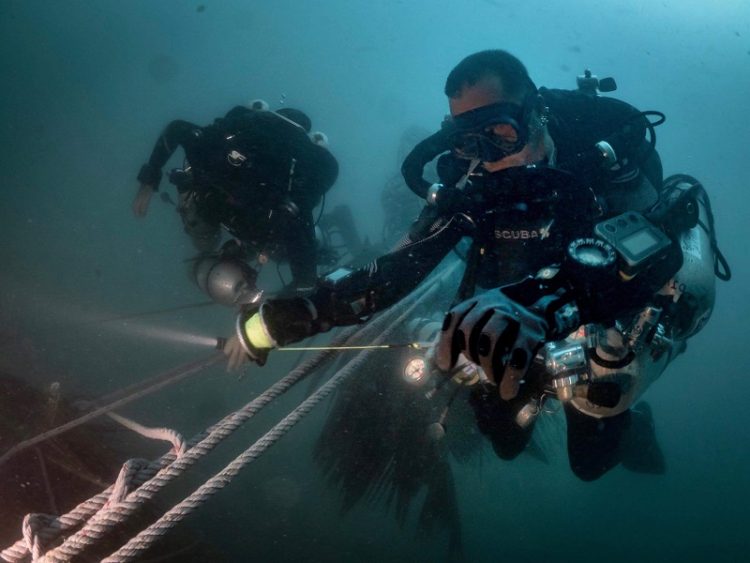 April 2019 a team of technical divers from the South East Asia Explorers club navigated the rickety pier in a small fishing village outside of Songkhla. As we loaded the fishing boat that was to be our home for the next three days, my mind flashed back to the events in January 1942 – had the second torpedo found its target? Years before, a team of divers including my friend Mikko, had located a wreck which was believed to be the IJN Tayru. This was the second ship awarded sunk by the o19 in the action that day. But we were unconvinced – the Japanese records had no mention of this loss. At that moment my mind was brought back to the present by a jolt of pain. Unfortunately I had found a hole in the pier! The IJN Akitas’ cargo could find good use here I thought.

We arrived on station at 1600 and quickly got a return. Still bleary eyed the crew threw the shot line on our leeward side! Windward drift on our ship pulled the shot away from the mark and, late in the day, 50 meters wouldn’t afford us much bottom time. Having divers in the water this remote in the dark would be unwise. Our first team entered but returned 45 minutes later unsuccessful. With 6 hours to the primary target and sunset fast approaching we decided reluctantly to leave. The sea lets go its secrets grudgingly – this anomaly would have to wait until the next time.

At sunrise the next day the calmness of the sea bore little witness to the drama that played out here all those years before. We took control of the helm and Ed took control of the shot, placing it at the shallowest part of the return…our luck was changing.

We split into teams which would maximize our chances of finding the identity of the wreck and reduce traffic on the ascent line. Erik and I descended the line, it seemed longer than usual, stretching into the dark blue and deeper into this mystery. At last the twisted metal of the bridge came into view. We headed to the bow, dropping in to check the cargo in the holds, there was no wood! Passing the winch we descended over the side, – there was no name plate visible. This was not unusual – both axis and allied forces would paint the ship names out, confusing their enemy, trying to guess tonnage sunk in action. Hitting our turn time we returned to the ascent line. I wondered if the others had any more success.

Once on the boat we compared our findings, Ed had found some bottles with Japanese writing. Although having a great dive the rest of the team had drawn a blank. Dimensions of the vessel were similar to that of the Akita, but we needed a name plate or maker’s plate to trace the origins once back on shore. The second dive concentrated our efforts on what we knew about the Akitas’ sinking, Mikko dropped over the side to look for torpedo damage while we stayed around the bridge looking for clues. Swimming along the remains of a walkway I noticed porthole outers laying on the deck. Picking one up I looked for a number without success! Then quickly my attention was taken by a telegraph, only to have my hopes of a makers plate dashed seeing a large steel girder pinning the telegraph beneath a mountain of rubble. Our bottom time had run out all too quickly. Again I found myself hoping the others had more success.

Once back aboard we compared notes. Mikko had found heavy damage on the hull aside the engine room. The other teams were as unlucky as we were. Turning for home I started to think about the portholes lying in line along the walkway. Brass outer section corroding the hinge of the steel inner section had caused this.

Once on land I researched the location of construction of the two ships. The IJN Akita was built in Japan in 1915 while the IJN Tayru was constructed in Newcastle a few years later. The British built ships to last in that period, their porthole construction would have been solid brass even on the tightest of budgets. Japans use of modern materials would have lowered costs by using steel to affix the porthole to the hull.

The evidence clearly points us in the direction of the IJN Akita, but without a name plate we are only one step closer to identifying the ship and the lucky shot would still be Ed’s to claim.

For more details about tech courses and expeditions visit www.techdivethailand.com or contact info@djldiving.com