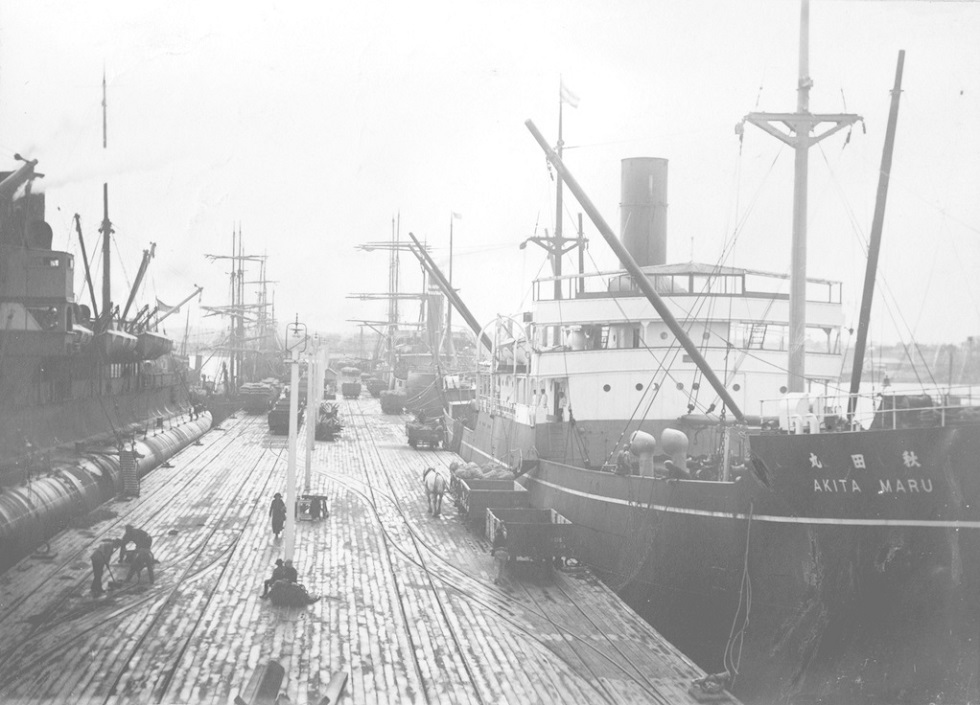 The sea state settles down a little in the last few hours and at 12:00 we arrive at the marks. The crew shot the wreck and myself, Dave and Vincent jump in and drift into the shot. We leave the surface quickly and descend down to tie in. Dave drops over the side to move the weight, I secure the wreck and we signal the surface.

Our attention then turns to the fun part. We run a distance line out around the front of the bridge. It holds, there are lots of cross members which are easy places to places to tie in. The bridge has collapsed in on itself. A twisted collection of iron and coral. We drop over the side, continuing along the side of the ship. Dave gets hooked on some line around the manifold and flashes an attention signal in my direction. I unhook him then I reach the end of my reel line. Dave gets his reel out and secures it though the first one and we continue. Manouvering across the top abaft (rear) of the bridge we drop into the hold and look around.

The holds are huge here, giving an idea to the size of this wreck. I hit my turn pressure and Dave recovers his reel. Then I take over and recover mine.

About 4 metres from the ascent line Dave picks up his staged o2. We then start our ascent.

The profile is 60 metres for 30 minutes. We move along the line at 3 metres per minute. A  controlled ascent from 48 metres up to our gas switch at 33 metres. Onto 36% then up to 6 metres and o2 deco. The sea state is running at about 1 metre with no current. At 3 metres we move over to the bars and start breathing the o2 supplied from the surface. But the intermediate pressure is set too high and the reg blows off the hose connector. So we go back on the stages. The crew pass down a line and we  pass up the empty bottom trimix stage then the 36% .This makes it much easier to get onto the boat in the 1 metre swell as we only have to carry the 6 litre o2 tank.

I hit the surface  and pull myself onto the ladder so that the boat moves with me instead of into me. Once on the boat my attention turns to the possibility of a second dive. We quickly top the remaining back gas with air and make a 18/30 we then make a 18/35 side tank. This reduces the potential for an ibcd hit. Top up the deco gases 36% and 100% then wait, we get back into the water at 16:00 hours. The current is running at two knots. It’s an ambitious  undertaking with 5 tanks on and we manage to pull ourselves half way down the boat before giving up. Sometimes you just have to admit it when you’re getting your arse  kicked.