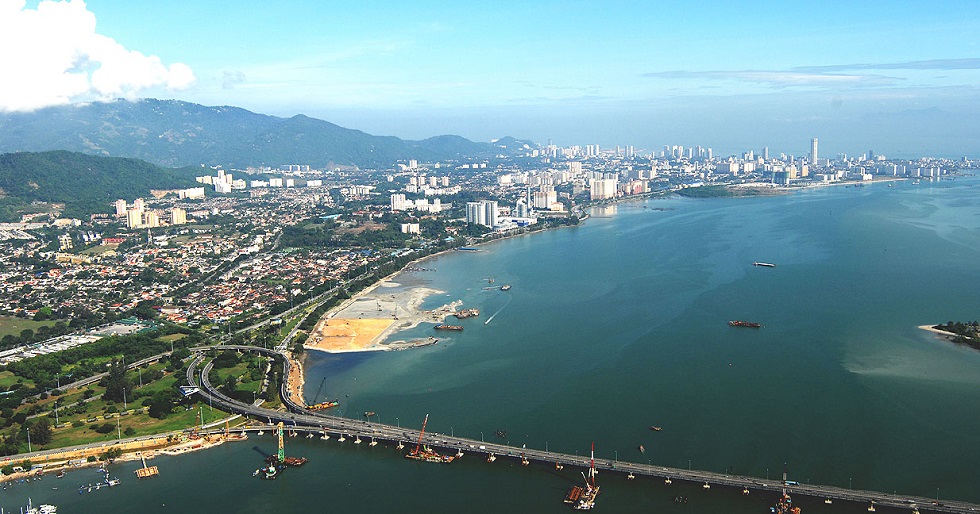 Today I wake up to a thousand ships outside my porthole. We are at anchor ,waiting for the fuel boat to refuel the Giovanni, so we can continue our journey. We have anchored at one of Stu’s waypoints from which he has obtained gas before, and are waiting for the supply ship to come alongside. Stu only has Thai Baht and will need to go ashore to change it if the Singaporeans wont take it, which has the potential to hold us up. We asked the captain and he has informed us that he has enough diesel to get to Penang. Its around 330 nautical miles. Stu who has hired the boat has decided to go for it so we head out of Singapore through a truly amazing sight. One of the great engines of the far east, Singapore.

We  settle down to 48 hours of making headway towards our next target. Arrive at Penang in time for a few beers, no diving for a few days . The sea is flat and calm although the surface viz is cut to around 100 metres. The captain  suddenly makes a big correction on the helm. We go to see what’s happening and a huge freighter comes across our bow. Good job for radar .

I wake up to flat calm seas. T he captain is switching watches with our engineer. My head hurts a little. We have breakfast and I blend the gas for myself and Tom. The target depth is  60m,  an old cargo ship I located a couple of years ago. We partial pressure blend a 17/35 and decant 02 then continuously flow blend the 36% nitrox.

This job is often overlooked on a Tec boat but is a skill no Tec boat could live without. Dave has born the brunt of this work, and has done a great job, but I think its time I take over. No beers today! After analyzing the gas, I settle down to the rest of the voyage. We are hugging the coastline on the Malaysia side in the small boat coastal traffic zone. When travelling south, the small boats hug the Indonesia side. I’m happy to be on the Malaysian side heading north because  there’s less chance of a pirate attack here. We pass the entrance to port klang and Kuala Lumpur and I hit the sack with a good book.

We awake to the sight of Penang. We have to enter Georgetown from the north as there is a huge suspension bridge joining the island to Malaysia and according to the sat nav we need permission to pass underneath. This  will add another 40 nautical miles to our journey.

We arrive in Georgetown at 0800 and look for a diesel barge. I get on with some chores and do my washing. Good job as I’m becoming socially unacceptable.

At 09:00 we go ashore for some supplies and to stretch our legs. The guys go to immigration and we head up to see an old friend at Jims’ place. We do some shopping and have a great curry at Captains restaurant in Chulia  street.

The architecture in Georgetown is stunning and deserves it cultural heritage city status. We get back to the ship at 1700 with all the gas pumped and ready for the next adventure.

I  awake this morning to Tappy knocking on our cabin door. He informs me that the captain can’t find a return on the mark. I stumble out of my bunk and up to the bridge to check the GPS systems we’re using are the same and at first glance they appear to be, but nothing shows on the sonar. The last time I was here the return was  huge. We search for  half an hour then try to speak to some fisherman nearby.

Something smells a little fishy. As I turn on the radios to monitor any radio traffic it’s strangely quiet for a group of three fishing boats with a large vessel bearing down on them. You would expect them to be communicating over the radio. I  see the flashing lights of signaling mirrors, the captains are contacting each other, but maintaining radio silence a sure sign they’re up to skullduggery.

When we come along side the first boat, there appears to be nobody in charge. We try to raise them, but nothing. We come alongside the second boat and the captain ignores us. The ships are fishing in Malaysian waters but the crew are probably  from Burma or Indonesia and fishing illegally, we will never know. We move onto the next mark, its only 0700.

The next mark is 13 nautical miles away: two hours at 7 knots

note:-  I think the engineer has been at sea too long he keeps on making suggestive remarks about lady boys leaving me feeling a little uncomfortable.

We arrive at the second mark and start running a search. The bottom reads 75 m and after 10 min we get a spike on the sonar. A 10 metre rise, but the return looks like an undulation on the bottom so we go off to check another  mark nearby. There we  get a nice return, definitely a return off of something. The trouble is that the current has started running, so we decide to put the shot in and go and have a look, keeping the bottom time down to 15 min so as to minimize the deco and save gas. We get ready and the captain drops us in up current so we can drift back to the line.

We leave the surface early  and join the line halfway down. When we arrive at 67 metres we find the weight drifting in the current. Vince tries to follow the line in the sand but I see the shot moving too quickly so I cut the dive to save gas for the next effort. We run the 15 min plan and hit the surface after 52 min.

We then have a chat. The team want to move onto another mark. I guess this wreck will have to wait to be discovered.

One thought on “Diary of the recent expedition, Dive 14”