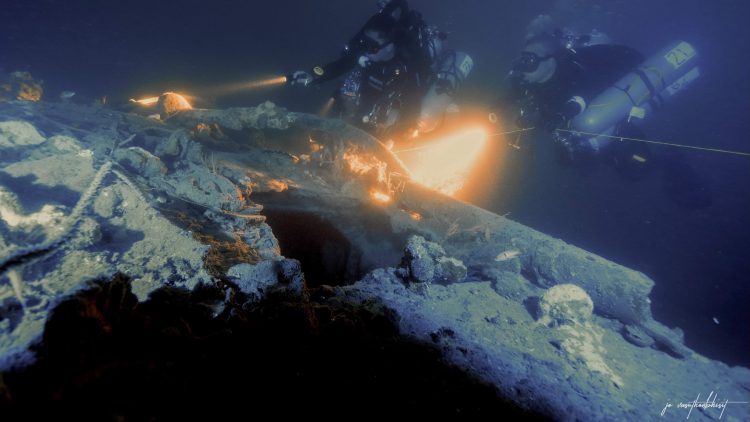 Divers from the South East Asia Explorers Club pack their units and twin sets onto the night boat. Eager to travel as the covid restrictions ease, they make their way to Samie San, an old wooden fishing boat, our home for the next five days and 400 nautical miles. I wait at the pier, my sense of smell under attack by the unmistakable aroma emitted from the previous night’s catch. Once our equipment is loaded, we set off hoping to take advantage of the calm conditions the changing prevailing wind brings during October.

Our team needs no introductions, having met when completing an In-Water Recompression workshop. Long-range expeditions have risk in accident management; no chance of an evac or accessing a chamber in the middle of the gulf would be as likely as finding rocking horse poo. A controversial topic IWR, not rocking horse poo. Previous experience has convinced me of its’ value.

Our team is a mix of open circuit and CCR divers, as often happen on trips. The two systems make for uncomfortable bedfellows. Limitations placed on the CCR diver and differing protocols for gas switches demand attention during different stages of the dive. Discipline is needed to maintain the buddy system. Avoiding the temptation to wander off and do your own thing becomes tricky, even if one is aware to the severe reduction in accident sadistic incurred when doing so. 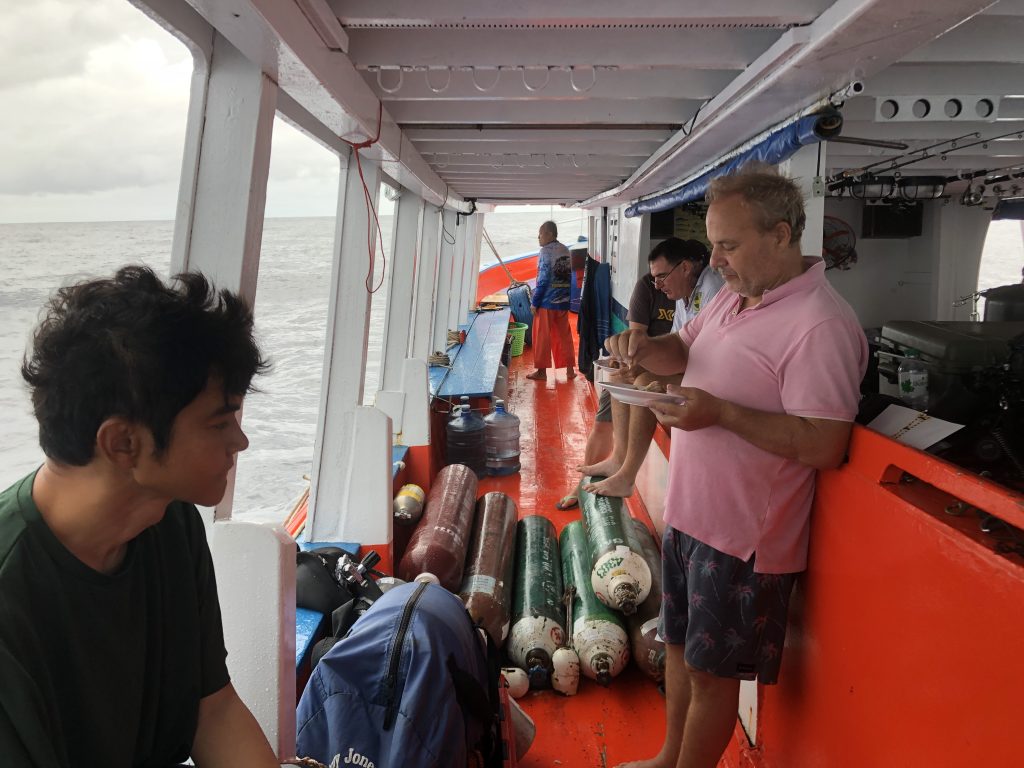 We deal with these complications, then complete some warm-up dives on an older shipwreck and head out to an area surrounded by automated gas platforms in the middle of the gulf. A curious backdrop for the expedition. We planned a dive on the Tottori Maru, one of the infamous “hell ships”. The Tottori Maru was used to transport the Bataan death march survivors in the Philippines to the factories of war in Korea and Japan. Packed like sardines in the cargo holds aft of the mid-center bridge. The captors kept the human cargo in atrocious conditions, which claimed some life in transit and many more due to the diseases contracted on this arduous voyage.

The situation on board could have been made far worse, but the quick thinking of a GI alerting the captain to a torpedo attack narrowly missed the ship.

The Tottori Maru was ultimately sunk by the USS Hammerhead while attempting a supply mission. But as I swim around the wreckage, her more infamous history attacks my senses, sending shivers through me. I recount in my mind’s eye the horrific events witnessed by the twisted eroding metal. My torchlight briefly touches a ladder reaching deep into the dark holds and encouraging further my imagination. Finally, my buddy flashing a signal brings me back, the dive time turns us. We head for the assent line. A vast unexplored shipwreck deserves days, not minutes of bottom time. Yet, so much is left unexplored.

Climbing aboard our fishing boat once again, the promise of the next coordinate seduces the team. So, we move off, heading for a mark located and dived once by the Trident a tech diving live-aboard some thirteen years previous. Loosely identified as Sakura Maru, the wreckage could Easley be the Nanmai maru number five as both fleet tankers of 800 Tons fell victim to the USS Hammerhead during the same action in 1944.

The weather had turned, a front had run over our position, turning a calm, lazy sea into a foaming two-metre swell. The sunset quickly approaching only a part of the team would have the chance to confirm the wreckage, a job made more difficult by the low light levels late in the day. The pour visibility on the bottom further complicates identification.

Surfacing without any more information, we had a decision to make. Stay here to decipher the wreckage or move off to a new mark? The choice is made easy by whatever it is that makes divers choose the uncertainty of the unknown over a sure thing. Could it be the chance of discovering Eldorado or some other historical treasure?

Three independent fishermen had given us the following marks, so there was something of interest. Only 2 NM away! We covered the ground quickly, arriving just after sunset. A primary search produced a considerable return on the sounder, a ten-metre solid red return now. All we had to do was contain the excitement and try to sleep.

The night passed slowly, broken by images conjured up in our imaginations. 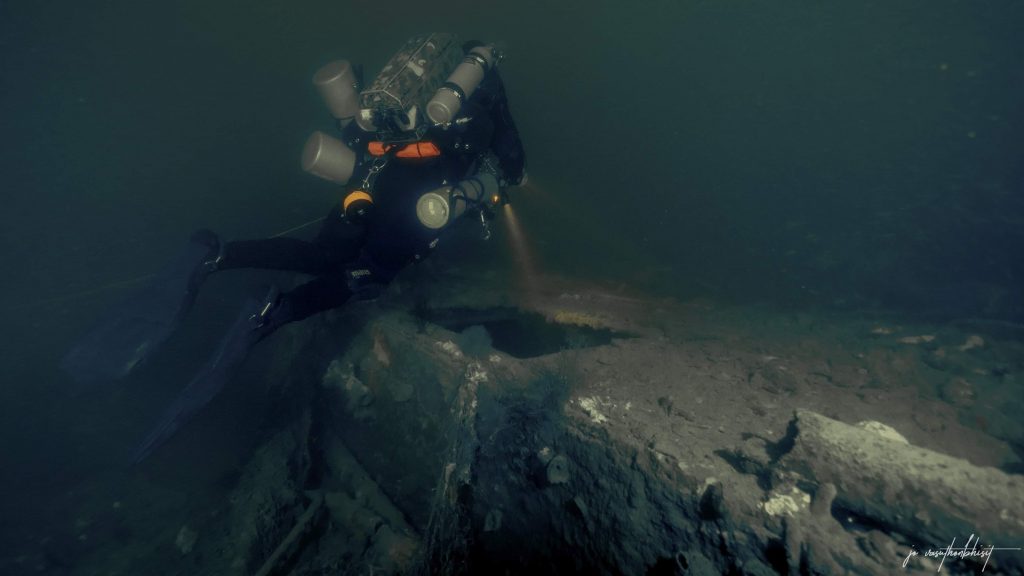 Unable to contain our curiosity any longer, we entered the water before breakfast and before the sunrise had developed onto the yardarm. 73 metres to the sand, the return had shown a structure that rose ten metres from the bottom, eight minutes to descend slowed by bubble checks and current we arrived at the wreck. I tried to get my bearings. The ship was massive. Large cleats gave us an indication of the size of the vessel, working across to the gunnel. We noticed an open hatch, a ladder reaching into the ship between two large plates, inspection access? We crossed a large pipe, modern construction minimum coral growth large metal plates. She appeared to us a tanker design we seemed to be on or close to the bow, but she was huge! Records will surely lead us to the identity of this ship a significant loss. Unfortunately, gas constraints turned our dive before we could learn more.

Our discovery poses more questions than answers. But it will have to wait. The remoteness of the wreckage shields the story a little longer. we head for home but not before a couple of dives on some older wooden shipwrecks. Here we are struck by the contrast between the large metal structures standing proud of the bottom and the wreck mounds created as the hull deteriorates, leaving only a rise on the sounder screen and debris to mark the location, constantly under attack, engulfed by the environment and the march of time. We return to port excited by our discoveries watching the weather for our next opportunity to unlock the secrets that lay hidden in the Gulf of Thailand.

Tim became a technical diving instructor for IANTD in 1995 after working in numerous locations including the Philippines, Similans, Koh Tao, Malaysia, Hong Kong, Sipadan, Borneo, Solomon Islands, Gran Canaria and Gibraltar. He has been responsible for locating wrecks in the Gulf of Thailand, Perinthians, Penang, Malaysia and Gran Canaria. The oldest shipwreck Tim has located was approximately 2000 years old where Tim recovered an ancient Roman amphora. Tim is a BSAC first-class diver, Tech Diving instructor trainer and Dive Coxswain instructor examiner. After achieving technical instructor ratings in DSAT/IANTD these days he prefers to teach the mixed gas courses offered by BSAC as they are more wreck orientated, which is Tim’s passion. Tim founded Davy Jones Locker Diving, which was originally set up as a one man outfit training expats in Hong Kong. He progressed into setting up dive centres in Gran Canaria, Gibraltar, Mae Haad and Sairee Beach in Koh Tao. He now owns and runs Davy Jones Locker in Sairee Beach, Koh Tao which is a BSAC centre of excellence and a PADI 5-Star Centre.
See all posts by Tim