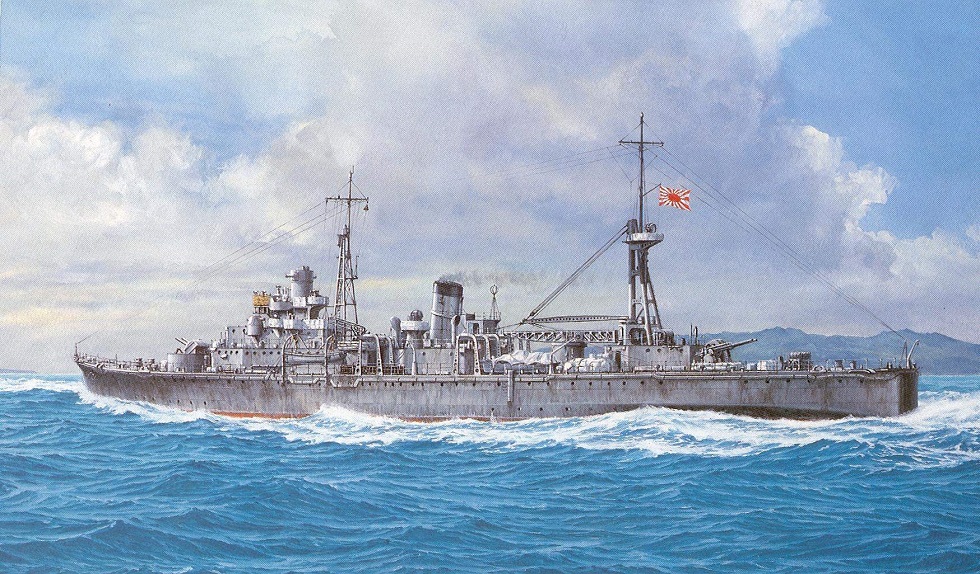 Sea state has calmed  down as  we get closer into the coast. I watch the sun rise  and check with the captain. We still have around 5 hours to the mark so we have some coffee and snacks. Then I switch the back gas tanks to another twin set. As the Hatsutaka lies only in 34 mtr we fill our back gas with 32% and save the TMX for the deeper dives. I drop the traveled gas and take 100% o2 for the deco. We plan 60 minutes on the bottom.

We shot the Hatsutaka at 11:00 and Stu tied in. The sea state is calm but the current is running hard. Stu has his scooter but still has to kick hard to get to the line. He does’ well to tie in. We estimate the current to be running at around 2 knots.

We secure the boat and wait for the current to decrease. But the tide tables are not very accurate for this area and sometimes there is no slack. So after an hour we decide to go. We’re carrying a lot of gas which is good for the run time but hard to make headway in a current.

Jim jumps in and we can hear him cursing. He’s not very popular with  the crew. He’s a hard new Yorker and doesn’t suffer fools too gladly, but his stance nearly causes a mutiny. Myself and Dave opt for a more  diplomatic approach  keeping the trip together.

Jim can’t make headway to the bow because  the current is too much for him, but he continues to blame the crew for not tying a granny line onto the boat so that he can enter the water with it in his hands. It’s a good point but the Thai crew aren’t listening to him. The line is running out 15 mtr behind the boat.

The engineer jumps into the water and secures the granny line to  the descent line, avoiding the jump between the line along the length of the boat and the descent  line.

We get ready after 30 mins. As planned we jump in and pull ourselves along the length of the boat to the descent line. My manifold is leaking on the isolator and I have already lost 100 bar of my back gas. I turn off the isolator and let the other team members know. I have a side stage of bottom gas and minimum gas is 75 bar so I decide to turn the dive when I  breathe down the side. The wreck is only 33 metres deep so I will only have incurred 3 minutes of deco on o2 for every 10 mins on the bottom if the dive lasts longer than 30 minutes, so I have loads of gas.

We run a distance line around the wreck. The viz is down to 5 metres, but we can clearly see the  heavy damage created in the  original attack, it must have been hell .

The bow was blown off and the ship broke in two. So without finding the stern section i.e. the props, it is very difficult to know if she’s lying on her starboard or port because the metal is so twisted .

I take the dive out around what I think is the bridge. This is lying off the deck at right angles, a 5 mtr gap between the hold and the superstructure.

I then swim around the hull. No props but there is current there, so I turn the team and move back along the deck. Here I hit my reserve and have to finish the dive. My bottom time is 40 minutes so I have incurred 3 minutes of deco. But because of the exertion level of the dive I run stops at 12/9/6/and 3 metres making a gas switch at 6 metres. The current is still running at  approximately 2 knots and I’m bubble trapping my muscles in my forearms. So I make the deco very conservative. Some of my regs are purging and my mask is continually flooding, so I am happy I don’t have much deco to run.

I watch Dave and Vince coming up the line. They’re getting pushed up the line with the current. Plenty of exercise on this dive but rewarding .

We get back on the boat and quickly decide to try for another dive, hopefully on a slack. We knock up gas and I try to repair the manifold. Jim is still complaining and Dave gets a little short with him stating that “we are all customers and if he wants to change something he can do it himself instead of moaning at us”. There are, in truth, some things that the crew can improve. But you don’t build teams by causing division and his style clashes with the Thai mentality.

The water continues to run and it’s now getting late so we have to untie. There is also a storm heading our way, so we decide to jump in to untie. The captain is brought into the plan by Dave. We get ready. My manifold is still leaking so I decide to run the back gas as twin independents, sucking down the side tank.  We decided to jump in at the side of the boat. Next, we instruct the captain to untie, but maintain station on the buoy because the surface viability is decreasing. We will come up the buoy unless the current is too strong then we will shoot an orange smb, and he should follow that. If there is yellow one, then we need gas.

This is the same as the previous dives. Its best not to change the plan too many times with the Thais as it can confuse them. The light on the surface is cut making it important to maintain contact with the shot at all times, although as long as the team ascend the line we have a GPS on it.

We get ready to jump in. Dave and Vince go and my side tank starts leaking at the first stage. Now its too late to repair it and I also have a problem with the isolator so I call it a day, get out of my kit and help with the support. The captain unties and tries to recover the granny line. But the sea state is picking up and he’s struggling to maintain station. So we chuck it in, deciding to recover it at the end of the dive (this being the lesser of two evils). Not wanting to run over the divers, Jim wants to recover the granny line but it’s pointless to argue with the captain at all. We all ignore him and the line goes over, we monitor the line after 56 minutes the guys appear on the surface and we recover  them  into the boat.