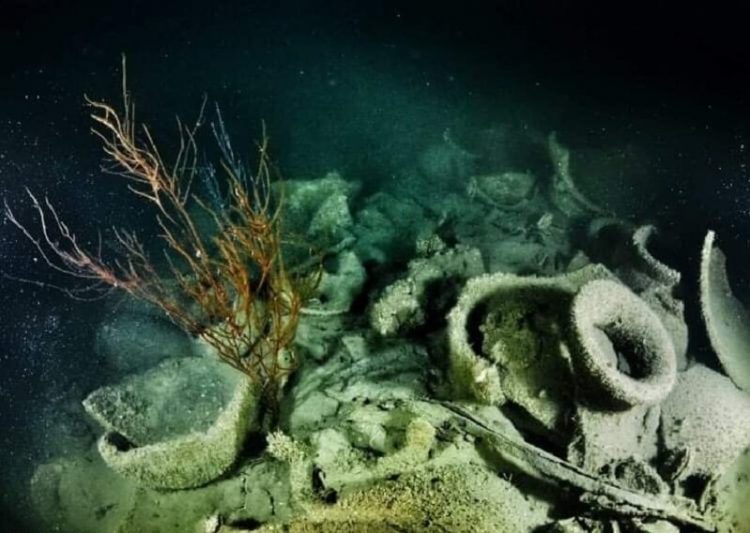 Few things get a diver’s pulse racing more than the thought of treasure, images of pirates’ chests overflowing with jewel-encrusted goblets flash into divers’ imaginations. But, in reality, richness comes in many forms – the Australia tide or Nanking cargo bear testament to the value of Ming dynasty pottery. Items such as this mean that a pottery shipwreck can hold great historical value and is worthy of exploration. Some technical explorers will say the real treasure is in the experience shared. In any event, the Gulf of Thailand has the potential to deliver.

Our understanding of the evolution of trade in this region improves with each new wreck located. With this in mind, I wondered what adventure the next few days would have in store. Our team of 6 comprised of experienced ordinates from a fisherman friend. If the weather was about to close in we were in good hands, although the absence of any life raft always gets my attention. The heady ideals of health and safety have not yet enriched this part of the world! Should I stay, or should I go? The Clash classic pops into my head for only a second. The outcome was never in doubt.

My buddy/friend Andy was our only open circuit diver, so we got on with blending his mix for the target’s depth of 60 metres. 18/40 chosen for the bottom, and 50 for decompression. All of the CCR divers’ gasses were either pre-mixed or leftover from previous trips. CCR has quickly changed the cumbersome logistics of open circuit expedition planning.

Battling the weather and preparing for the dives

The southwest monsoon was baring its teeth. We punched our way into the swell, spreading our legs out on the sleeping matt to stop slipping off. After a restless night’s sleep, we rose with the sun, making final preparations. The conditions were building overnight into the morning and dropping off in the afternoon. By 12:00 the swell had dropped to 1.2 metres, our teams were ready. We avoided diver jams on the line by staggering the dives at 40 min duration, allowing for good surface support. 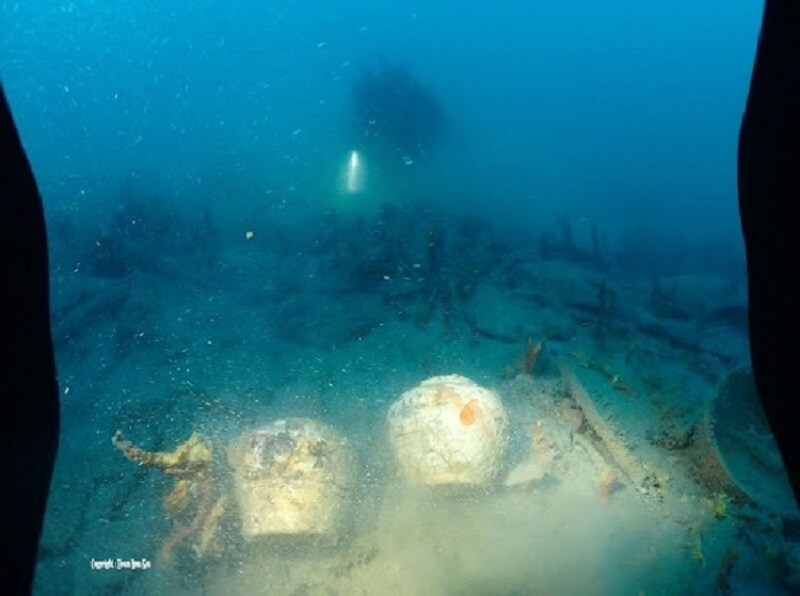 Diving the wreck mound in search of pottery

Sira Ploymukda and Siwat Worachananant were first up. They were to run a distance line and leave it in place should they find the mound. They were followed by Bruce and Oliver and last but not least, Andy and myself. We hoped the wave height would continue to drop – wooden fishing boats tend to bob like corks making it tricky to hand off tanks at the end of the dive. The time passed slowly, but eventually, the first team surfaced, and we entered – Bruce flashed an OK as we passed him on the line – I tried to read his body language, without success!

Pottery on the wreck still intact

We hit the thermocline at 40 metres, continuing to descend to 60. The visibility was still a good five metres & Jira’s distance line was in place. Immediately we started seeing pottery. Having seen wreck mounds before, I was taken back by the density and variety of pottery. Plates stacked in one area, large & small amphora’s in another, separated by design? Visibility allowed us the luxury of seeing the outline of wood still visible on the outskirts of the mound. A blue and white pattern marked on some of the pieces. Much of the pottery at the surface was intact. I expected fishermen s activity to have trawled the mound, damaging and mixing the different designs and causing the best examples to be located beneath the surface.

Happily surprised, I recovered the distance line, then we returned to the ascent. At six metres we watched the stern of our vessel crashing into the troughs and reluctantly we surfaced, holding on to a thrown line. Working slowly, we un-clipped our tanks and passed them one by one up to the crew who had positioned themselves off the stern ladder. Moving quickly, we removed fins and put our weight on the bottom rung, immediately moving with the ship in the wave height. Once onboard we compared notes.

A long history of trade exists between China and Thailand, with hardwood from Thailand exchanged for pottery from China. Although Thailand had an established trade route exporting pottery around the region, manufactured in the kilns around Sukothai, Thailand has lost thousands of ships to this commerce through the millennium.

Siwat, one of the archaeologists on board, commented that the blue on white images matched the Ming dynasty pottery recovered from the foundation digs for new developments around Bangkok, possibly 400 years old. Was this pottery part of a passenger’s prize possessions – or was it part of a larger cargo? Were the origins of the ship the Sukhothai kilns in Thailand or Nanking in China? It’s difficult to date and identify a shipwreck from one piece of pottery.

A pottery shipwreck full of mysteries

Finding the wreckage only presents us with more questions than answers. More time and further investigation would be needed to unlock these ships’ secrets. I wondered if the Thai archaeology department will get time to uncover the real history of this shipwreck, given its location in international waters. The crew recovered the lines, and we moved off – investigating two more marks, although neither would captivate my imagination as firmly as the first target. 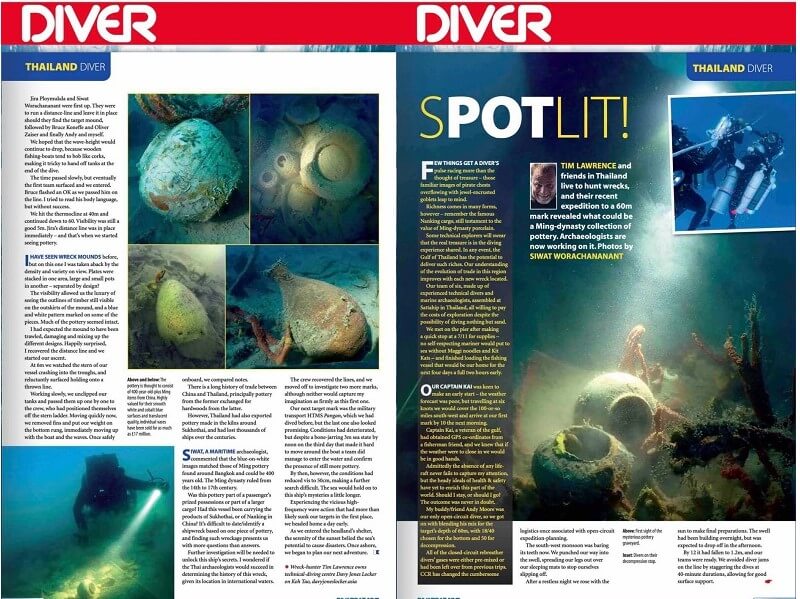 A trip to HTMS Pangan before heading home

We knew our next target mark as the military transport HTMS Pangan. We had dived the ship before, but the last target was promising conditions that had deteriorated to a three-metre sea state by noon on the third day. A team did manage to enter the water earlier to confirm more pottery. Still, the conditions had reduced the visibility to half a meter, making a further search difficult. The sea would hold on to this ship’s mysteries a little longer.

It was hard to move around the boat in the bone-jarring sea state. The irony that we were experiencing the vicious high-frequency wave that had potentially sunk our targets hadn’t escaped my thoughts. We headed for home port a day early. As we entered the shelter of the headland, the serenity of the sunset betrays the sea’s potential for disaster. Once ashore, we begin to plan our next adventure.

Contact us for details about tech diving expeditions and wreck exploration in the Gulf of Thailand.